You are here: Home / Archives for Love Nokia Lumia 900 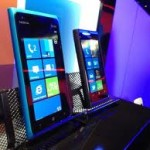 Nokia launched very rich featured mobile phones in the past year. Now in the early 2012,it is again appearing to follow the same trend. Nokia threw a bomb of surprises with the announcement about its new upcoming gadget Nokia Lumia 900.The smart phone is expected to be launched in March 2012,but it has started shining […]

Filed Under: Gadgets Tagged With: Love Nokia Lumia 900
Recommend on Google
Get this widget »»