You are here: Home / Archives for Microsoft Surface 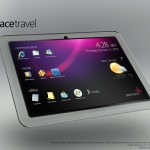 Filed Under: Tablets Tagged With: Microsoft, Microsoft Surface, Surface
Recommend on Google
Get this widget »»