You are here: Home / Archives for Sony announces Android 4.0 Update for its Tablet S 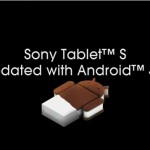 Japanese Electronics Giant, Sony Corporation has released Android Ice Cream Sandwich for its Tablet S devices and this is done before the planned launch of its Xperia line of smart phones. A representative of the electronics giant stated that whenever you connect your tablet to the internet, you would be prompted for a system update […]